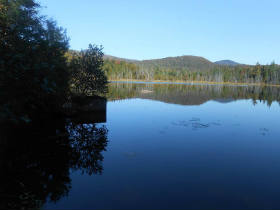 Work has resumed at the South End of Willoughby Lake on the State Forest. This summer's plans include the construction of the two remaining parking areas closer to the lake and the associated stormwater treatment facilities, the establishment of a formal car-top boat access area, and the rehabilitation of the disturbed areas along Route 5A to mitigate the impacts of runoff from the road surface. The tree clearing has been completed and construction is expected to take several weeks for the parking facilities. The anticipated schedule will have the contractor returning later in the summer to address the car-top boat access after the busy beach traffic subsides.

We will be posting status updates on the project Twitter feed, which can be accesed here: https://twitter.com/WilloB_Updates

The Department of Forests, Parks, and Recreation (FPR) has begun work on the south end of Lake Willoughby in Westmore, VT. These improvements are in response to significant increases in visitation and use and are intended to improve safety, environmental quality, and visitor enjoyment at Willoughby State Forest. This fall, the focus will be on completing an overflow parking lot at the ballfields on the west side of Route 5A. The next phases will begin in the spring and summer of 2022. These include parking area improvements, ADA-accessible boat ramp access and boardwalk to the West Cove beach, and bathroom facilities. Learn more in this press release.

As FPR moves from the preliminary design for necessary improvements to Willoughby South End and prepares to submit applications for permits we would like to provide a heads up on the progress of the design focusing  on some of the specific areas of interest and minor changes to the design.

FPR intends to install compost toilets at this facility. As design progressed, however and we worked with the supplier (CLIVUS New England), it became apparent that placement of composting facilities is premature.  On-the-ground understanding of use patterns is required before the final installation of any permanent solution.

Composting Units, as opposed to flush toilets require placement of the units in a manner that results in balanced use, especially if relatively small trailhead units are used.  Experience has taught us that failure to maintain balanced access will quickly overload the closest, or more favorably located units leading to the inability of the composter to “keep up” with the use. This results in operational failure and the need to pump out the unit reducing the composting unit to an expensive vault or portable toilet.

Our long-term goal to install composting technology remains and along with that, elimination of repeated service calls portable toilets require. To that end two locations have been identified for eventual installation which balances access.  The transition to two locations was the result of the reality of walking distance along with the understanding that the number of trail head units likely required would be difficult to collocate without significant impact to the site.  In the short term those indicated sites will be the location for portable toilets.  This will allow FPR to track usage and confirm the size, number and balance of composting units needed, at which time installation of composting units may take place.

During design we also were made aware that the owners of Whitecaps Campground were forced to lock their toilet facilities due to use from the beach visitors who were not staying at the campground.  This supports the need to track bathroom use before finalizing the compost toilet locations.

Near the water: The parking layout has changed somewhat.  ADA, drop off access and lower lot parking will remain (15 spaces) along with the upper parking lot (40 Spaces). The upper parking lot has been consolidated to a smaller footprint with spaces that would allow for pull through trailer parking in the event a visitor brings hand launched watercraft on a small trailer.

This change was made to preserve the integrity of the remaining forest canopy and reduce overall impact.

The designers, in an effort to reduce impact on the existing canopy came to realize that construction activity at the site would eliminate, or so significantly damage, the trees intended to remain in and among the parking spaces that it would soon become entirely open, resulting in greater tree loss overall and subject the remaining green space to unregulated parking.  By compressing the parking, the area becomes better defined, overall impact to the canopy is reduced and remaining green areas more easily protected.

A lot has been formalized South of “the Notch House”. Laid out as an 83-car lot this parking will be an unlined gravel lot which will fit vehicles only as efficiently as the public chooses to park. An approximately 2,000-foot-long trail is proposed to allow access to beaches. Because of this distance a space for portable toilets has been indicated in association with the layout.  Because of sight distance on Rt 5A and the speed of travel, issuance of a VTRANS permit to allow construction of this improvement is likely contingent on a reduction of speed on this section of Rt 5A.

The trail plans have become more detailed.  Alignment that accounts for grade and unique site conditions have been more finalized.  While they lay largely as shown in the concept, the following adjustments have been made:

The ADA trail traversing East from the overlook has been changed to a non-ADA footpath.   While FPR remains committee to full ADA access, the impact of construction, the needed switchbacks coupled with the terrain and tree cover on site would have significantly altered the trail corridor.  All other ADA trail corridors will accept the upgrade without significant canopy modification.  In addition, the need to return from the overlook via the same access route is not seen as a loss of experience due to proximity of the overlook to the main trail and the lack of views from the easterly trail.

The boardwalk to the West Cove will be placed on the South-Westerly margin of the wetland to allow easier access. The boardwalk will have less impact on the wetland and provide a physical backstop to the ongoing expansion of sand fill into the wetlands behind the west beach.

The overlook deck remains a needed component of this project as there is clear evidence of the public going off trail to gain that unique viewpoint.  The design of the overlook is a simple 161 SF platform that comes off the trail at a right angle.  The half trapezoid shape is designed for minimal impact and will allow access to the view while protecting the bank and allowing reestablishment of plant growth adjacent to the trail.

The car top boat launch is as initially proposed.  It is only called out here due to several iterations of design that occurred during negotiations with VTRANS. The location has been moved away from the lake slightly to reduce the impact on the limited beach space provided.  Along with managing runoff from adjacent 5A, detailed below, the car top launch pull-off will also remove vehicular access to the beach and water.

Treatment for stormwater runoff from the parking areas and roads within the project area is incorporated with the design.  Trails will follow best design standards to prevent erosion. The car top launch improvements will treat the runoff from the adjacent portion of 5A which is currently channeling soils and discharging directly into the lake.

Stormwater from Route 5A south of the parking entrance will not be treated by this project but will necessarily be re-directed to avoid damage and erosion. Incorporating the treatment of all runoff from 5A with the project stormwater system would be substantial.

Discussions continue with VTRANS to encourage a project to collect and slow this stormwater and the FPR design leaves space to accommodate such treatment.

The nature and layout of the project should allow for coordination that would minimize impact to the public during the summer.  The project lends itself to design build using several smaller contractors.  Because there is only currently parking for 12 cars in the lot a potential sequencing could include building the upper lot and connecter trails prior to the lower lot to maintain adequate parking.

Combined with not allowing work on the weekends and proper traffic control by the contractor, it is conceivable construction can happen without significant impact to the public use of the area.

Willoughby State Forest is easily accessible from State Routes 5 and 5A and is bisected by Lake Willoughby, with Mount Hor (2648 feet) to the west and Mount Pisgah (2751 feet) to the east. It is located on the divide between the Saint Lawrence and Connecticut River watersheds.

Unique Features: The most spectacular attraction of this area is Lake Willoughby and the adjacent cliffs of Mount Hor (2648 feet) and Mount Pisgah (2751 feet) that rise from the lake. This area possesses significant ecological, recreational, and aesthetic values. The highest peak in the forest is Bald Mountain at 3315 feet in elevation. Lake Willoughby is 1653 acres in size with a maximum depth of 308 feet, making it one of the deepest lakes in the northeastern United States.

Please note that bicycles are ONLY allowed on gravel surfaced roads (the CCC Road, Duck Pond Road) within Willoughby State Forest and NOT on hiking trails.

There are no designated camping sites within the forest and no facilities other than the portable toilet units at the South End during the summer and the unit at the CCC Road trailhead year-round. Car camping or RV camping is NOT allowed at Willoughby State Forest. Only primitive camping may take place within the Forest. Camping near the lake is NOT an allowed use.

Willoughby State Forest is available for dispersed recreational activities, including hiking, primitive camping, cross country skiing, snowshoeing, hunting and fishing.  There are over 12 miles of hiking trails on the forest and numerous ponds for swimming and fishing.  Most of the trails are well suited to the novice and intermediate hiker.  Several other trails are located on adjacent private ownerships.  These trails are maintained by the Westmore Association and Northwoods Stewardship Center and are described in the “Day Hikers Guide to Vermont” published by the Green Mountain Club (GMC).  These trails are located on Wheeler, Bald, and Haystack Mountains.

Willoughby State Forest includes approximately 12 kilometers of groomed Nordic terrain around Bartlett Mountain - suitable for both classic and skate skiing. Weather permitting, the trails are groomed through the winter months (generally late December to mid-March) by the NorthWoods Stewardship Center. In addition, Vermont FPR is working with the Northeast Kingdom Backcountry Coalition (NEKBC), a chapter group of the Vermont Backcountry Alliance, to develop a variety of ungroomed backcountry ski terrain, including both gladed trails and narrow ‘skin tracks’. NEKBC manages gladed lines on Mt. Hor, Bartlett Mountain, and the lower CCC Road. These glades are part of a pilot effort to provide a greater diversity of backcountry terrain on public lands while reducing illegal cutting. Any unauthorized removal of forest vegetation is prohibited.

Planning Overview: The long-range management plan for the Willoughby State Forest is complete and being implemented annually.  It was approved by Commissioner Jonathan Wood on 04-01-2004 and amended in 2012 with an expansion of Cross Country Ski Trail Networks at Bartlett Mountain.