The Department is allowed to designate Natural Areas by statue (10 V.S.A. §2607). THe poilicy that describes how the FPR designates Natural Areas is set out in FPR Policy #7.

2. Big Falls of the Missisquoi. 16 acres, Town of Troy. This site includes the largest undammed cascade and gorge remaining on a major Vermont river. The area includes big old hemlock and white pine trees. The plant life in this Natural Area is diverse and includes several uncommon species. The falls are a popular recreation attraction (swimming, fishing and viewing) as the site is readily accessible from Vermont Route 105.

3. Button Point Natural Area. 14 acres, Button Bay State Park, Town of Ferrisburg. Two-acre Button Island is a portion of an ancient (500 million years old) fossil coral reef. The eight-acre peninsula contains fossils, a mature forest stand (including oaks, hickories, pines, maples, and others), and several rare and endangered plant species. Although the Natural Area has been disturbed (house, trails, some vegetation management), it is significant botanically, ecologically, and geologically. The house serves as a nature center and as a residence for a park naturalist in the summer.

4. Cambridge Natural Area. 22 acres, Cambridge State Forest, Town of Cambridge. This is a stand of old white pine and hemlock on a steep, sandy hill. Individual trees are of large diameter and height. Access to this Natural Area is through the adjacent cemetery.

7. Charles E. Smith Natural Area. Alburg Dunes State Park, Town of Alburg. One of the few examples of a sand dune community in Vermont, this Natural Area is being managed to protect and restore the rare plants that grow here. In addition to the dunes, the State Park includes a large forested wetland complex with the largest black spruce swamp in Grand Isle County.

9. Emerald Lake Natural Area. 4 acres, Emerald Lake State Park, Town of Dorset. This small Natural Area is on a steep bank at the south end of the State Park. It is an example of an old-growth forest in Vermont. Hemlock, sugar maples, and other hardwood species grow here, with several trees of noteworthy age and size.

10. Fisher-Scott Memorial Pines. 22 acres, Town of Arlington. This site is considered one of the finest large-diameter white pine stands in Vermont. The stand has historical as well as ecological significance, as it was the writing retreat of well-known Vermont author Dorothy Canfield Fisher. Pines in this area are among the biggest and tallest in the state, and sizable hemlocks grow on the slopes along Mill Brook. This site is also a National Natural Landmark (1976).

11. Gifford Woods Natural Area. 7 acres, Gifford Woods State Park, Town of Sherburne. This is perhaps Vermont's best known old-growth northern hardwood stand, with many grand-sized individual trees of sugar maple, beech, yellow birch, basswood, white ash, and hemlock. The understory is rich with native wildflowers. Though small, it has been much visited and researched. It was designated a National Natural Landmark in 1980.

12. Granville Gulf Spruce-Hemlock Stand. 20 acres, Granville Gulf Reservation, Town of Granville. An old-growth stand of red spruce and hemlock grows on the steep rocky slopes at the north end of Granville Gulf. This site contains many old trees, but because of the ledges and thin soils, these trees are relatively small.

13. Hamilton Falls Natural Area. 211 acres (includes falls and a forest buffer), Jamaica State Park, Town of Jamaica. Cobb Brook cascades 125 feet down a mountain slope, through a pine-hemlock woodland and into a series of large potholes. There are several falls, the most spectacular of which drops 40 to 50 feet into a large pool. Hamilton Falls is unique, dramatic, and dangerous. Do not take chances on the steep and slippery rocks.

16. Kingsland Bay Natural Area. 50 acres, Kingsland Bay State Park, Town of Ferrisburgh. This Natural Area includes two peninsulas on Lake Champlain separated by scenic Kingsland Bay. Both support unspoiled natural plant communities, on the shoreline as well as on and behind their bluffs. Several rare plants grow here. On McDonough Point, a hiking trail goes along the perimeter through a mature forest of sugar maples, hickories, oaks, and other hardwood species. It offers several fine overlooks of the lake. There is no formal trail on the Hulburt (western) portion of the Natural Area, which contains one of Vermont's best examples of a lake bluff cedar-pine forest.

17. Lake Carmi Bog Natural Area. 140 acres, Lake Carmi State Park, Town of Franklin. The bog is at the south end of the park and is almost entirely dominated by black spruce and tamarack, with an understory of mountain holly, other shrubs, sedges, sphagnum mosses, and other typical bog plants. The black spruce bog is largely undisturbed and is unusual in Vermont for its size.

18. Lords Hill Natural Area. 25 acres, Groton State Forest, Town of Marshfield. This is a fine old-growth stand of hemlock-northern hardwoods on the slopes of Lords Hill. The site contains many large specimens of white ash, sugar maple, red maple, basswood, yellow birch, beech, red spruce, balsam fir, and hophornbeam. It is surrounded by privately-owned property and permission to cross is needed to gain access to this Natural Area.

19. Lucy Mallary Bugbee Natural Area. 12 acres, Towns of Peacham and Danville. This Natural Area includes Stoddard Swamp, a northern white cedar swamp, and a fen (type of peatland) rich with a variety of wildflowers, some of which are listed as threatened and endangered. The Natural Area was named after a pioneer in the protection of Vermont's wildflowers and given to the State from the New England Wildflower Society.

20. Marl Pond and Swamp Natural Area. 30 acres, Willoughby State Forest, Town of Sutton. A small, scenic, calcium-rich pond is bordered by a mature northern white cedar swamp with several rare plants. The pond bottom was mined historically for its marl (calcium and magnesium carbonate deposits), which was used locally as a fertilizer.

21. Mendon Peak Natural Area. 90 acres (state-owned portion above 3200 feet), Coolidge State Forest, Town of Mendon. This is a remote high-elevation forest of red spruce, balsam fir, white and yellow birch, and mountain ash. Mendon Peak has a small area of dwarfed shrubs and alpine plants and supports a diversity of woodland bird species. There is no trail access.

22. Morristown Bog Natural Area. 30 acres, Town of Morrisville. East of Route 100 is a large undisturbed black spruce-tamarack bog with several rare plant species. Originally acquired as a source of peat for the state tree nursery (but never mined), it was later designated a Natural Area for its characteristics as an outstanding peatland.

23. Moss Glen Falls Natural Area (Granville). 5 acres (includes the falls and a buffer zone), Granville Gulf Reservation, Town of Granville. This is one of the most visited falls in the state, immediately adjacent to Route 100 in Granville Gulf. Deer Hollow Brook cascades over 30 feet into a large pool. The falls are best viewed from the bottom. Do not climb the steep, slippery rocks here. They are very dangerous.

24. Moss Glen Falls Natural Area (Stowe). 80 acres (includes the falls and a buffer zone), C.C. Putnam State Forest, Town of Stowe. This is one of the highest waterfalls in the state, with a total drop of over 100 feet. It is also one of the most beautiful, as the water courses through a gorge, into pools, and over sloping vertical walls in a deep forest dominated by hemlock. The steep slippery rocks here are hazardous. Do not climb them. 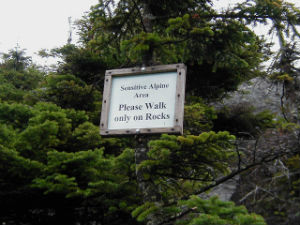 26. Peacham Bog Natural Area. 748 acres, Groton State Forest, Town of Peacham. This is the second largest peatland in Vermont, one of the two documented "raised" (slightly domed due to peat build-up at the center) bogs in the state. The Natural Area includes the bog of 125 acres and an extensive buffer of a variety of wetlands and upland softwoods. Many wildlife species, including moose, bobcat, and fisher, use the area.

27. Shrewsbury Peak Natural Area. 100 acres, Coolidge State Forest, Town of Shrewsbury. The State-owned portion of the peak is a popular hiking destination and is surrounded by an extensive, undisturbed high-elevation forest that is habitat for a variety of forest birds. A hiking trail to the summit provides opportunities for spectacular views.

29. Tabletop Mountain Natural Area. 129 acres, Groton State Forest, Town of Groton. Located on the State-owned portion of Tabletop Mountain, this area is not "old-growth" in the strict sense, but has been set aside to allow it to become a representative mature hardwood forest (beech, yellow birch, sugar maple, and hemlock). It contains occasional, scattered trees of large size and old age.

32. Weybridge Cave Natural Area. Above-ground land area is one acre; the subterranean acreage is unmeasured. Weybridge Cave State Park, Town of Weybridge. This is thought to be the largest cave in Vermont and the second largest in New England. According to spelunkers, it is an excellent cave to explore for its geologic features and passageways. Only expert cavers should attempt exploration, as both the descent and passageways are very difficult and require special equipment.

34. Worcester Range Natural Area. 4,032 acres, C.C. Putnam State Forest, towns of Middlesex, Waterbury, and Worcester. All the land above 2,500 feet elevation in this state forest is designated Natural Area. It includes the summits of Hunger Mountain, White Rocks, Worcester Mountain, and other peaks, and embraces a large, unbroken subalpine forest of red spruce and balsam fir. Several hiking trails run though this area