Every year wildand fires burn grass, brush, and forest fuels in Vermont. The majority of these fires burn in the spring. Occasionally, summer or fall fires occur in a dry year.

Generally spring fire season begins shortly after snowmelt when weather conditions are favorable for drying wildland fuels, dead grasses, leaves and twigs. Clean-up after a long winter season generates a great deal of debris burning activity. Most Vermont wildland fires occur between the end of March and the beginning of June.

Southern counties, low-elevation areas, and exposed south-facing slopes generally experience dry conditions earlier during spring, while northern counties and higher elevations have dry conditions later in the season. During the spring fire season, access to fire areas can be extremely hampered due to mud conditions. 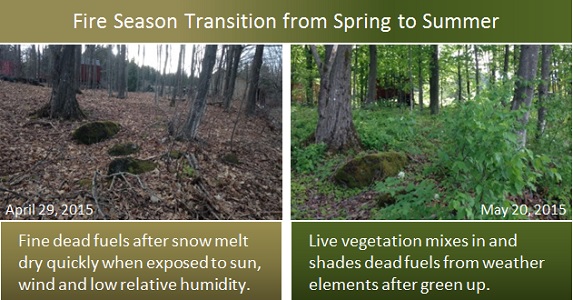 After green-up has occurred and the spring rainy periods have subsided, the summer months can become hot and dry. Even though wildland areas may look green and damp, the forest ground fuels and litter may be dry enough to sustain fire. Campfires, logging operations, and lightning are common causes of summer fires. Most summer fires occur from mid- to late August into September. Depending primarily on the amount of rain received, a summer fire season may or may not occur.

In many cases, summer fires are slow in getting started and often escape detection due to the slow way in which burn and their often remote location. In general, wildland fires spread at a slower rate during this time of year, with the exception of fires in softwood areas.

If litter and duff layers are very dry, summer fires will burn deep into the ground. Should this happen, control and mop-up will be difficult and more costly.

When foliage season is over and the leaves dropped, wildland fuels begin their drying process. Wildland fires can occur shortly after leaf drop if weather patterns favoring hot, dry, and windy conditions are present. Fall fires typically occur from late September until the end of November and the season usually comes to an end by mid- to late November with the presence of snow conditions.

Wildland fires during fall periods can burn either surface fuels (recently cured grasses and newly fallen leaves) or ground fuels if summer drought conditions persist into the fall. The burning period for fall burns is shorter than spring fire season due to shorter day length and the amount of time needed to dry overnight moisture from heavy dew. With normal amounts of precipitation, the fall fire season may be very quiet or not occur at all.