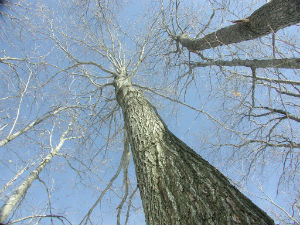 The Earth's climate has changed and is projected to continue to change because of a rapid and dramatic increase in the concentration of greenhouse gases (GHGs) in the atmosphere due to the burning of fossil fuels and land-use change. Forests play an important role in reducing the amount of carbon dioxide (CO2) in the air because they take in CO2 through photosynthesis and store the carbon in their wood, branches, foliage, and roots. Carbon can be stored for extended periods of time in trees and soils (referred to as "carbon storage" or "carbon stocks"), and healthy trees continue to take in additional CO2 on a yearly basis (referred to as “carbon sequestration”). But, forests are also impacted by the changing climate, like warmer winters and more frequent heavy rainfall events.

The Vermont Climate Assessment (2021) provides an analysis of climate change in Vermont and the potential impacts of these changes.

There is strong evidence that Vermont’s climate is changing. Vermont is becoming warmer (average annual temperature is about 2°F warmer since 1900), and Vermont’s winters are becoming warmer more quickly (winter temperatures have warmed 2.5x more quickly than average annual temperature since 1960). Vermont is also becoming wetter (average annual precipitation has increased by 21% or 7.5 inches since 1900). However, Vermont still experiences prolonged droughts because of shifts in the water cycle, and different regions of Vermont can experience different climate impacts. The data for Vermont mirror trends at the regional, national, and global scale.

Impacts of Climate Change on Forests

Climate change is considered a 'threat multiplier' for forests. The Vermont Climate Assessment (2021) includes an analysis of the impacts climate change may have on Vermont's forests, including trees in our cities and towns.

For more information on the impacts of climate change on forests explore these sources: