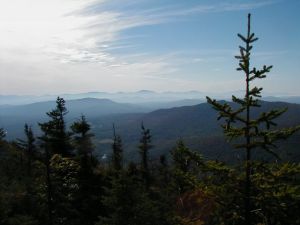 General Description:
The fire tower erected on the summit of Burke Mountain in 1912 is reported to be the first fire tower in the state of Vermont. From this vantage point, forest fires could be located and the proper authorities notified. The Darling Family donated a large parcel of land to the State in the 1930s, which became Darling State Park and, sometime in the 1930s, Burke Mountain was identified by local residents as a potential recreation site. The early plan for this “forest park” included an auto road, ski trails, hiking trails, picnic facilities and running water. A Civilian Conservation Corps (CCC) crew was employed to build the auto road to the summit and completed it in 1935. Interest in downhill skiing grew over the years with the first ski lift installed in 1953. A portion of Darling State Park has been leased to various entities over the years as part of the Burke Mountain Ski Area.

Unique Features:
Burke Mountain, the main feature of Darling State Park, is 3500 feet in elevation. The toll road to the summit was constructed by the CCC. Remnants of CCC structures can still be found in the area. The fire tower at the summit of Burke Mountain offers panoramic views of the surrounding area.

Planning Updates:
The Vermont Agency of Natural Resources recently adopted the long-range management plan for the Victory Management Unit (24,000 acres). Public meetings were held to gather comment on the draft plan, and on June 1, 2017, the final plan was adopted.  For more information and to review the final plan, please follow the link below.