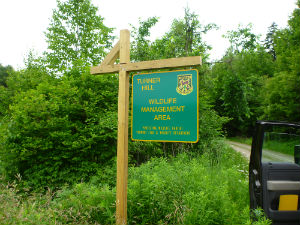 Turner Hill Wildlife Management Area (WMA) is located in the towns of Grafton and Athens in southeastern Vermont. It is in a rural area which features a primarily forested, undeveloped landscape.

As is typical of the Vermont landscape, much of the parcel is upland forest characterized by a mix of northern hardwood species and eastern hemlock. The high plateau on the southern portion of the parcel, however, contains a notable occurrence of Lowland Spruce-Fir Forest, which is typically found only in the coldest regions of the state. Wetlands comprise about 6% of the land area at Turner Hill WMA and are responsible for much of the species and habitat diversity on the parcel. Aside from vernal pools and seeps, most of the wetlands are influenced by beaver activity – the dynamic nature of these wetlands makes them especially valuable to the plant and animal species of the WMA.

From Athens, a dirt road connects the class 3 Walker Road to Legal Trail #6 in Grafton. The WMA has approximately 1500’ of frontage on this road which is a popular recreation corridor and provides good access to the WMA lands. A small parking area was constructed in 2018. It is located approximately 500 feet from the end of the maintained portion of Walker Road. It is drivable except in winter when this section is not plowed.

Deer wintering area is a widespread habitat feature on the WMA, occupying approximately 274 acres of Hemlock and Hemlock-Northern Hardwood natural community. There are multiple wetland occurrences, approximately 65.5 acres, on the WMA which provide habitats beneficial to a variety of mammals, birds, amphibians, and insects. Some riparian areas around these wetlands are comprised of alder scrub/shrub habitats. These wetlands are also important to bear for spring feeding and moose for summer forage. One of the key features on the WMA is a beaver wetland complex in the south-center of the parcel. This area hosts a great blue heron rookery.

Three plant species of conservation concern have been located within the WMA including:

Turner Hill WMA is located on a plateau overlooking the Saxtons River. This aspect and the wetland features common throughout the property elevate some areas to moderate archeological sensitivity using a GIS-based predictive model. However, no prehistoric resource sites have been found within Turner Hill WMA.

There are several cultural historic sites on the WMA – many associated with Alexander Turner, a freed slave who moved to Grafton in 1872. The Turner portion of the property was deemed historically significant at the local, state, and national levels in a report by the Preservation Trust of Vermont in 2011. Therefore, in 2018, a homestead site and 5 acres were deeded to the Windham Foundation to be redeveloped as a historic educational site highlighting Vermont’s African-American heritage. This site contains several dilapidated buildings, including the “Birchdale Camp,” and one rock foundation of 19th and 20th century residential and agricultural remnants. The Preservation Trust and Windham Foundation are currently restoring the Birchdale Camp and developing access and educational materials for this site. In addition, there are two other cellar holes, and stone walls and fencing are common.

Most recreational use occurs during the fall hunting seasons. There are no established trails on the property, but hiking/walking is another popular activity. Bird and wildlife watching in and around wetlands is enjoyed by some as is snowshoeing in winter. Because beavers are active under the ice, ice thickness is unpredictable and walking on ponds can be risky. It is recommended winter users stay off the ponds and streams for safety.

The Long-Range Management Plan for the 1,052 acres that make up the Turner Hill WMA was completed in 2021. The plan can be viewed at the link below.