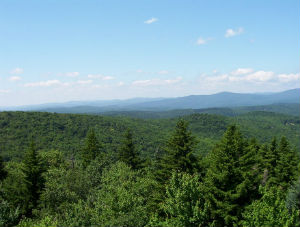 A farmstead and farmland in the 1800s, the farm buildings were replaced in the 1950s by the construction of the state park which opened in 1960. The Civilian Conservation Corps (CCC) constructed a small roadside picnic area before state ownership. Historical remnants of Hogback Ski Area are found on the east side of Mt. Olga. Due to its topographical prominence, the summit of Mt. Olga has been used for fire observation and electronic communications. The existing fire tower, now used for public viewing, was removed from Bald Mountain at Townshend State Forest and rebuilt on Olga in 1958. Two forest fire watchman’s cabins were removed in 2005 due to their decrepit and dangerous condition. The original electronic communications tower was replaced with a modern tower in 1994. The campground opened in 1960.

The views from the Mt. Olga fire tower (due for restoration in 2015) are stunning and relatively easy to get to. In addition, Molly Stark State Park is adjacent to the Hogback Mountain Conservation Area (Marlboro Town Forest) lands. Numerous trails are available in the Conservation Area, including one which links to the state park.

Molly Stark State Park contains about two miles of foot trails. In wintertime, cross-country skis and snowshoes can be used on the foot trails and park roadways. Bicycles are limited to the paved and gravel roadways. Park entry fees apply during the operating season of Memorial Day weekend through Columbus Day.

The Long Range Management Plan (LRMP) for the Brattleboro Management Unit was developed in 2012.