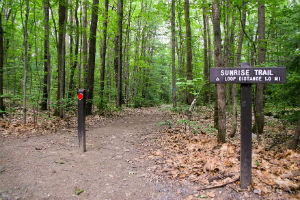 Fort Dummer was initially acquired by the State of Vermont during construction of Interstate 91. Interstate 91 created a 156-acre portion of Guilford land with no access from Guilford roads for maintenance or school busing and conversion to a campground was a means to ensuring Guilford didn’t someday have roads, homes, and school children isolated from the rest of the town. The campground was constructed in two stages in the 1960s and 1970s to provide overnight camping and day use. Since then, its primary purpose has been overnight camping.

While there are not many visible historic resources at Fort Dummer State Park, the parcel has a deep historical context which includes:

The park is comprised of a 61-site campground, picnic area, and trails. Use has been historically low due to the difficulty in finding the park. Park redevelopment has added electrical and water hookups for recreational vehicles on some campsites to meet demand and increase occupancy. During the off-season, hiking and walking are the primary recreational uses.

The Long Range Management Plan (LRMP) for the Brattleboro Management Unit was developed in 2012.